Incredible, interactive and ecological technology which allows to build large, monochromatic signs which are making a lot of noise while changing – they capture viewer’s attention. Electromagnetic way of control together with mechanical inertia of display links creates an effect of content appearing out of chaos of shaking pixels. Watch the video.

This is a device where art, electronics and precise mechanics meet

Technically speaking such a sign is a set of moving plastic disks with permanent magnet, which are driven by magnetic field. This technology was widely used for public transport or in sport signs where disks were slow and static. We managed to elaborate control method which allows to show moving pictures at a rate of 15 frames per second. Thanks to this we can show videos, animations and other effects.

In our world dominated by LEDs, it creates a difference.

Requires weatherproof enclosure, the modules should be protected from the temperatures extremes created by sun-loading on the display enclosure. 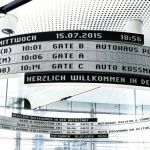 Samsung Electronics Japan opened a pop-up Galaxy Studio at Roppongi Hills, Tokyo in December 2012. “Split Scan” installed in the exhibition section expresses the innovative new technology and functionality of Galaxy, Samsung’s series of mobile computing devices produced.
A 4.3 meter wide wall consists of a flip-dots display and an original program using a range image sensor. When you stand in front of the wall, it scans your movement and shows it in real-time on the display.

Yankees Stadium from New York has chosen Alfa-Zeta as a supplier of this technology to realize a large sign – part of exhibition committed to Yogi Berra at a the New York Yankees Stadium in New York. The sign is a part of a mural showing this famous player. It is showing a presentation including various statements (“yogisms”) from which Mr Berra is well known.

Located in the heart of downtown Las Vegas, The Mob Museum showcases both sides of the notorious battle between organized crime and law enforcement. With high-tech theater presentations, iconic one-of-a-kind artifacts, and interactive exhibits, you can finally discover the whole truth and nothing but the truth.